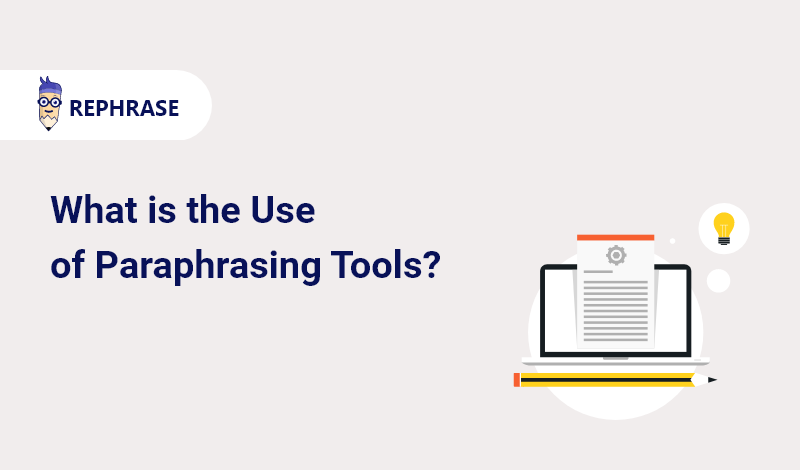 What is the Use of Paraphrasing Tools?

Paraphrasing tools have become quite popular nowadays, especially since they’ve been equipped with artificial intelligence. By using models like GPT-3, paraphrasing tools easily understand and continue the context of the entered content, and this helps them to work like human beings rather than automated tools.

Unfortunately, for a lot of people, the word ‘paraphrasing tool’ may bring to mind some sort of negative and ‘illegal’ image. This can be due to the fact that these tools have a bit of a notorious reputation for being used by copywriters to quickly churn out content.

But that’s not the be-all and end-all of paraphrasing tools. There are a lot of good uses to which they can be put. In this post, we’re going to help you learn about some of those so that you can use paraphrasers constructively in your writing work.

Let’s start this one off with an example.

What happens when a person doesn’t know the word ‘bulwark’? They use the words ‘a strong defensive wall’ instead.

What happens when a person doesn’t know the word ‘anachronistic’? They use the words ‘belonging to an older time period’ instead.

Essentially, due to a lack of proper vocabulary, some writers can end up using unnecessarily long phrases to describe something that can usually be defined and expressed in a word or two.

Paraphrasing tools can be a great help for this sort of problem. If you pick a smart tool and feed it some content that contains these types of needlessly long phrases, it can automatically substitute them with smaller synonyms.

To help you understand this a little better, let’s demonstrate this using an actual tool…and some actual content.

Input Text: Jim was shaking due to the low degree of temperature. His jacket, which was made of cow skin, was not being successful in keeping his body temperature high. He, therefore, crawled inside a hole in the mountain until the end of the storm of the snow.

Paraphrased Text: Jim was shivering from the low temperature. His cowhide jacket did not keep him warm. Therefore, he crawled into a hole in the mountain until the blizzard ended.

The text that we gave as input was 46 words long. The output was only 28.

As you can see in the above screenshot, the paraphrasing tool understood the context of the text remarkably. It made changes that shrunk the input to almost half its size. The output that it gave is also much smoother to read.

Now, usually, no one actually writes this poor of a passage except deliberately. But, if you ever find that a particular piece of text (like a sentence or so) in your content is not flowing well, you can simply put it through a paraphrasing tool to fix it.

Before moving on to the next point, let’s give another example to drive our point home.

Output Text: A dark-skinned person approached a white-skinned person. Then he realized that there was really only one person looking at the mirror placed in the courtyard with sunlight.

Another way in which paraphrasing tools can be useful is by removing repetition and improving vocabulary.

In a lot of cases, rookie writers can find themselves at a loss for synonyms to use for a word that they have to frequently mention in their content. To get some help, they can use paraphrasing tools.

Let’s look at an example of this use case.

As you can see in the output, the word ‘vehicle is used in place of the overly repeated word ‘car’…notwithstanding the fact that the overall quality of the text is still pretty lame.

In order to solve the problem of accidental plagiarism, paraphrasing tools can be a great help. For example, if you ever finish writing something just to find that it contains a lot of plagiarism, you can paraphrase those particular parts to make them unique.

While we’re on it, we should mention that although it is fine and acceptable for some to use a paraphrasing on their own original (but coincidentally ‘plagiarized’) content, the same is not the case with someone else’s work. You can’t take someone’s content, run it through a paraphrase and then use it as your own.

This sort of cheap trick can save you from getting into trouble, but it will wreck your integrity and reputation.

With that out of the way, let’s take a look at how paraphrasing tools can be a good fix for accidental plagiarism. We’re going to nick some content from our website and run it through a plagiarism checker.

As you can see, the content is showing up as plagiarized.

Now, we’ll take this same content and put it through a paraphrasing tool. Then, we’ll put the rephrased version and run it through the same plagiarism checker again.

As you can see in the image above, the paraphrasing tool changed the sentences quite a bit. Now, let’s put them through the plagiarism checker to see whether it spots whether the content is copied or not:

And…the results come back as 100% unique.

In a nutshell, we can summarize the use of paraphrasing tools by saying that they can make your content better for your readers. By making your content less clunky, these tools can help you in increasing your readership.

Plus, paraphrasing tools can also be helpful from an SEO perspective. Improving readability and eliminating plagiarism are some measures that can directly affect the potential of your content to boost your site’s ranking in the SERPs.

How Do You Paraphrase ...

Disable your ad blocker and refresh your page to carry on?